Insurance for your minitruck

This is a topic that keeps coming up, and popular on all import forums.

MiniTruckCanada.com asked Carson from CarsonExports which insurance companies he’s been able to work with. Here’s his list:

Getting insurance depends a lot on who you talk to on the phone. If you have other companies that you know offer insurance for right hand drive minitrucks and minivans, please let us know. 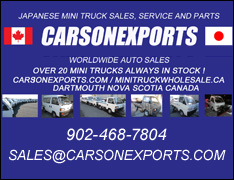 Click on the links below to see some of the variations available in new Mini Trucks:

Even if you’re looking for a used Mini Truck these variations might give you some ideas for customizations of your own truck.

RightDrive has a very unique mini on route. It is a ‘94 Sambar Dias Classic (VW) badged model with a rear crane. There are not many Sambars with cranes running around, especially in Canada. The crane is capable of lifting up to 500lbs and is situated right behind the passengers seat.  It is also running a CVT auto trans with the supercharged 660cc 4 cylinder.

Our friends at Right Drive were featured in “Driving on the other side of the vehicle” in the Dec 17, 2009 edition of The Toronto Star’s Wheels section.

Mark Toljagic talks about how imported vehicles from Japan are filling the needs of some Canadians faced with limited domestic options. He also discusses some of the issues surrounding the temporary banning of RHD vehicles in Quebec.

Read the entire story at Wheels.ca.

Winter Driving with a MiniTruck

The relative light weight of a 2WD MiniTruck with no load can make it difficult to get out of slippery situations on ice or thick snow. Therefore a 4×4 is recommended for true Canadian winter driving through snow, sleet and ice.

Hondas and Subarus tend to do better in the snow because the rear placement of their engines helps with weight distribution and traction of the rear wheels. Those with Suzukis and Mitsubishis may benefit from loading sand bags, patio stones, cement mix etc. in the bed over the rear axle.

If you’re driving with a load of lumber, firewood or a deer from a hunting excursion, there shouldn’t be any issue.

Tips for Winterizing your MiniTruck

You should always continue regular maintenance of all mechanical and electrical systems of your MiniTruck. But now is the time to check if you have any existing problems. If you do have any issues, it’s only going to get worse with cold weather.

Following is a list of items to check as you are winterizing your MiniTruck.

END_OF_DOCUMENT_TOKEN_TO_BE_REPLACED

Gas prices creeping back up

Jerry wrote to us from Fort Assiniboine, Alberta.

A few weeks ago in the last week of September, Jerry, his wife, youngest son, and their dog drove their Honda Acty MiniVan half way across Canada to visit family in Ontario. The 4,200 km trip took them through Alberta, Saskatchewan, Manitoba and Ontario. One can only imagine the beautiful fall scenery this time of year.

Through varying gas prices, the total cost of the trip was under $300.

Jerry writes, “That was an awful long drive in one of these little beasts but the economical factor made it worth while.”

As if that wasn’t enough, he’s also took his entire family (five plus the dog) on a thousand km tour through the Rockies (Banff and Jasper National Parks).

Jerry also owns a Daihatsu Hijet which has become his daily driver and hauler. As you can see from the photos, his vehicles take a lot of abuse. 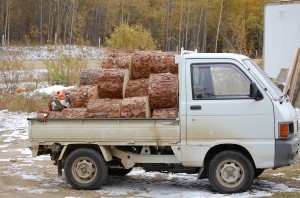 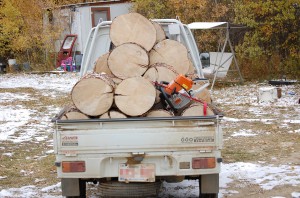 The 350 Kg rating gets disregarded.

He says of his prior vehicles, “I wouldn’t want to have to go back to regular pick-ups.”

We wish him the best on his next trip!

If you’re buying new rims for your MiniTruck, you will need to know it’s offset and how it affects your particular truck.

The offset of a vehicle’s wheel is the distance between the centerline of the wheel and the plane of the hub-mounting surface of the wheel. It is typically measured in millimeters. Wheels are usually stamped with their offset such as “ET45” for a 45mm offset.

Offset has a significant effect on many elements of a vehicle’s suspension, including suspension geometry, clearance between the tire and suspension elements, the scrub radius of the steering system, and visually, the width of the wheel face relative to the car’s bodywork.

Learn how to calculate wheel offset

After calculating your current wheel offset, use this neat tool from 1010tires to see if your new wheel will have fitting issues.